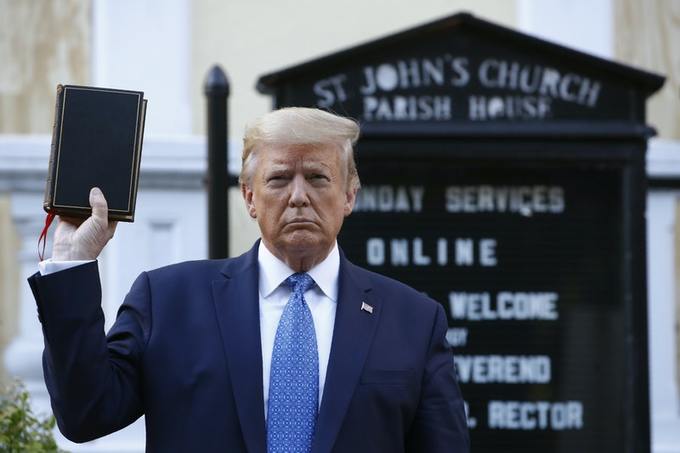 Donald Trump’s photograph outside a forcefully-cleared church entrance while holding up a Bible has brought new shame on Christianity. Faced by riots and protesters, he could have tried to ease tensions and sympathised with their very legitimate outrage. Instead, he made an attempt to demonstrate that he is in control and to make an appeal to the substantial religious bloc of his support base.

The Bible and a church building are hereby associated with his callous response to pain and anger.

No doubt some defence will be made for the US President. For my concerns right here, that isn’t important. What matters is the association that has been made between God, and his curse-worthy actions. Some people will forgive him, but many will not. He gives people an excuse to hate Jesus.

The biblical saying fits the situation uncomfortably well: “God’s name is blasphemed – or slandered – among the nations because of you” (Letter to the Romans 2:24).

I doubt Donald Trump is thought to be a Christian by any serious thinker. Nonetheless, by the actions he takes and because of the Evangelical Christians who support him, he functions as a representative of God. And he is inviting slander against him for that.

Jesus taught his followers that they should do things that prompt others to give praise to God (Gospel of Matthew 5:16). The photograph with the Bible outside the church building has done exactly the opposite.

That’s not even a distinctly Christian duty. Largely he has ignored these things, and so he is largely out of step with the God who is represented by the Book that he held and the building he stood outside.

Trump’s religious signalling is no more Christian than that of the Crusader Knights of the twelfth century who waged war in the name of Christ.

There is little any of us can do about the US President’s actions, but this is a good reminder to pay attention to our own. We who read the Bible and gather inside churches must take care that our actions bring praise and not slander against the God we represent.

Positively contributing to race relations where mending is needed is an important start. Standing beside those who can’t stand up for themselves is another.

Racial tensions and prejudice are not new problems. In the current day this is where gospel-inspired actions are most needed. This is where praise must be found for the God who is the God of Nations. People of the gospel must bring peace to this pain to bring praise to God’s name among the nations.