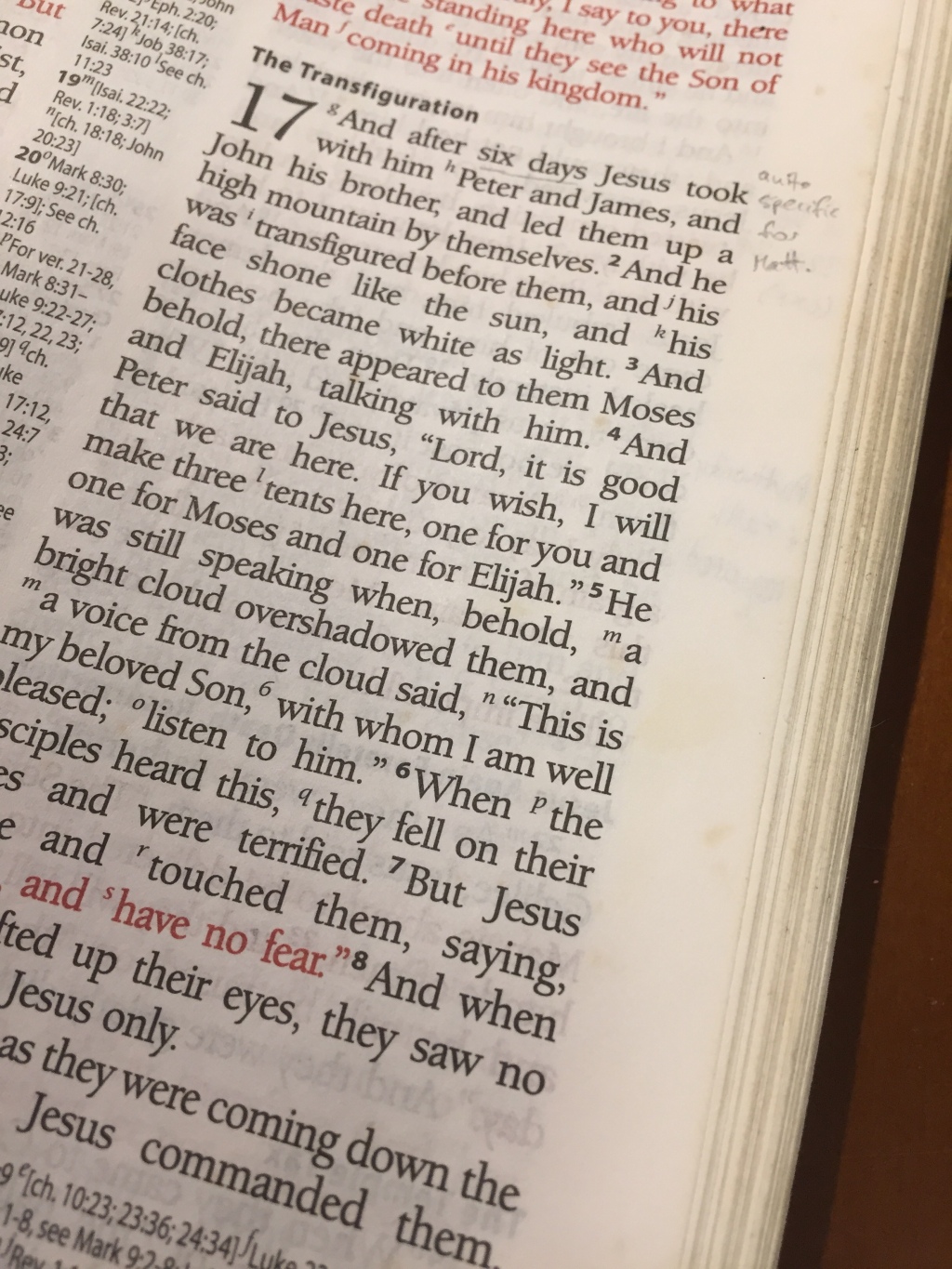 Christianity frequently conflicts with current ideas. Given this has happened since its inception, this should neither surprise nor dismay us. Rather, we should establish its difficult teachings in our hearts and minds so we can preserve them, present them, and faithfully pass them on.

The account of Jesus’ “transfiguration” does just that – it shows one step in the establishment of a difficult doctrine in the developing faith of Jesus’ first disciples. Matthew’s account of this unique event includes an easily overlooked feature which helps us see this: the abundant references to the disciples.

We are told that Jesus took them up the mountain and was transfigured before them, that Moses and Elijah appeared to them, that a cloud overshadows them and the voice of God instructs them regarding Jesus. The terror and reassurance of the disciples are also a substantial part of the narrative. This story is not so much about something that happened to Jesus, but about the disciples’ experience of it. Far from being superfluous bystanders, this event happened for their sake.

This makes sense when we consider what has just happened in Matthew’s narrative before this. The disciple Peter has correctly identified Jesus as the ‘Christ’ (Greek for ‘Messiah’) and the ‘Son of the living God’. However, when Jesus talked about his impending suffering, Peter’s response showed that he had the wrong idea of what being ‘the Christ’ entailed (Matt. 16:21-22). It was popularly thought that this promised figure would be a conquering king who would free the Jews from Roman rule.

A ‘suffering Christ’ was a theological oxymoron, even though it is unremarkable today.

It was because of this that Jesus had to give the hard words about carrying a cross to all his enthusiastic would-be followers – their expectations about following him were all wrong (Matt. 16:24-26). It is in light of this we can see that an element of doubt may have been present in the disciples’ minds: ‘was Jesus really the Christ?’ John the Baptist had faced the same dilemma earlier (Matt. 11:2-6). It would be unsurprising if the disciples did too.

The difficulty that Jesus faced in the proper discipling of his disciples was to have them recognise that he certainly was the Messiah, but not the kind of Messiah they had mistakenly come to expect.

Their experience on the mountain confirmed Jesus’ Messianic identity even though his words about his suffering had given them reason to doubt. The dazzling glory revealed a sneak preview that confirmed the exalted status of Jesus despite his short-term prognosis. The appearance of Moses and Elijah evoked ancient promises about the coming of the Messiah (Deut. 18:18; Mal. 4:5-6). The voice from heaven verified Jesus’ heavenly origin and ought to be listened to, despite his difficult words. The experience of the disciples on the mountain served to steady their uncertain faith. Not only was Jesus the Christ, but also a suffering Christ: his death served divine purpose. Glory and respect would come later in the plan.

The story of Jesus’ transfiguration served to preserve doctrinal truth: that Jesus is the Christ, that the Christ was meant to suffer and die, and that Jesus nonetheless possessed all the glory thought due to the Christ and even more.

These were difficult ideas to combine. The disciples struggled to grasp these important facts, and they carried the responsibility of being his first and primary witnesses.

It mattered that they got this right. The transfiguration was a foundation for getting a clear and correct doctrine of the identity of Jesus.